Roman aqueduct from Mons to Fréjus 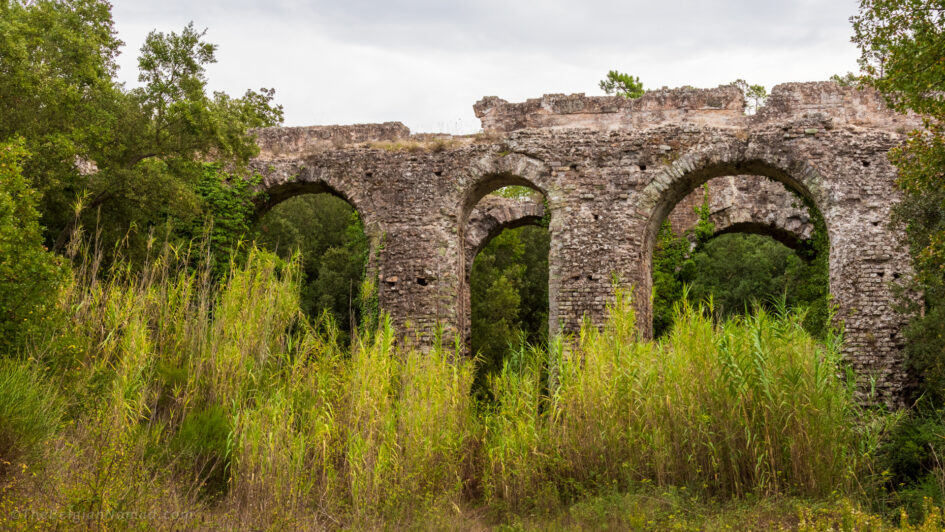 Access to fresh water in the region of Fréjus has always been an issue, with only small rivers crossing the area, and very hot and dry summers. Having become one of the most important ports in the Mediterranean, the Romans decided to build an aqueduct to provide Fréjus with a constant supply of water.

Details about its construction and use are sparse, but it is believed that it was built over a period of 20 year around the middle of the 1st century. It supplied Fréjus with about 2,900 m³ (102,000 cu ft) of water per day and it is estimated that it was in use for 400 years, until it was partly destroyed during a siege of the city.

Its 36 bridges, some still standing, were the most visible parts of this huge construction, and certainly still look impressive, but most of the aqueduct was actually located underground, in trenches and tunnels. In fact, the first few kilometers are still in used to this day.

While some of the most imposing arches are located in the hills north of Fréjus, some remains of the aqueducts’ arches can be found within city limits, like so many other Roman ruins in the area. The following can be found just a short walk from the city center.

“In three quarters of Fréjus, huge sections of ruins begin to appear here and there among the olive trees. It is the Roman aqueduct. The new and complete aqueduct was, no doubt, beautiful two thousand years ago, but it was no more beautiful than this gigantic collapse spread over the whole plain, running, falling, rising, sometimes with three or four arches half buried in the earth, sometimes throwing an isolated and broken arch to the sky or a monstrous buttress standing like a Druid menhir, sometimes standing with majesty at the edge of the road with a large semicircle leaning on the two cubic massifs suddenly transfiguring into triumphal arches. Ivy and bramble hang from all these magnificences of Rome and time.

The world is full of wonderful things you haven’t seen yet.
Don’t ever give up on the chance of seeing them.