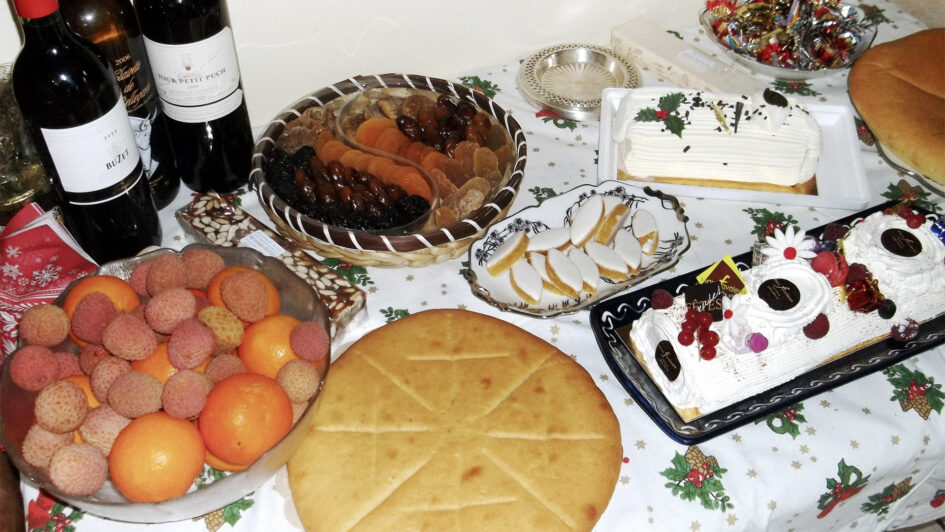 The Thirteen Desserts, known in French as the “Les Treize Desserts“, is a traditional holiday feast celebrated in Provence, France. The feast, which takes place on Christmas Eve, features a spread of thirteen desserts that represent Jesus and the twelve apostles. In this blog post, we’ll take a closer look at the history and significance of the Thirteen Desserts, as well as the desserts themselves.

The tradition of the Thirteen Desserts dates back to the Middle Ages, when it was common for people to fast during the four weeks leading up to Christmas. On Christmas Eve, the fast would be broken with a feast featuring thirteen desserts, one for each apostle. Over time, the tradition evolved to include specific desserts that represented each apostle.

Today, the Thirteen Desserts typically includes a mix of sweet and savory treats, such as dried fruits, nuts, and figs. Some of the most common desserts include:

In addition to these thirteen desserts, the feast may also include other dishes, such as olives, cheese, and fish.

The Thirteen Desserts is still a popular tradition in Provence, and many families continue to celebrate it on Christmas Eve. Some families even set up a special table or display to showcase the thirteen desserts. If you’re planning to visit Provence during the holiday season, you may have the opportunity to try some of these traditional desserts for yourself. It is a unique and delicious tradition that offers a glimpse into the culture and history of Provence.

Which ones among the 13 desserts are your favorites?

Some beautiful paths can’t be discovered without getting lost.